A week in the life of . . . Leanne de Souza, Artist Manager (The Medics, Thelma Plum, The Painted Ladies, Liam Gerner).

Leanne De Souza has been a band manager the entire time I’ve known her, some 25 years or so… She is working with some of the most exciting artists in the country right now, and we were lucky enough to be offered this insight into a particularly busy week for Leanne – the release week (from Sunday 25 January) for a new single by one of her artists. So if you are considering a career as an artist manager, this article has been written for you.  Sit back with a cuppa and read on.

As an artist manager of several artists and also a parent to a 14 year old and 11 year old this week finally feels likes my 2015 is underway, and starting with a BANG! Kids off to high school, a band (The Medics) dropping their new single in a highly charged political environment, fingers crossed for an artist (Thelma Plum) to be lucky enough to get a spot in the Triple J Hottest 100 that would a huge reward for a year of epic effort in touring, promotion and funding from 2014. I am planning set ups for another artist (Liam Gerner) for national and international touring this year and locking down the logistics of (Flights, Accom, Ground, Budget, Production) for a 20 piece live collaboration (The Painted Ladies) playing festivals in March! Lots to do so have to start organised and at my post – so the week starts for me on Sunday – thankfully in my air-conditioned home office with fast internet!!

Activities:
1. Started with a cardio workout at the gym, it’s going to be a big week! As un rock&roll as that sounds, keeping some exercise in the routine the last few years aids my productivity and gives me a chance to focus on the days priorities .
2. Dealt with 250+ emails from the past two weeks in the inbox that were “non urgent” but needed attention. Read, action, file x repeat x 250!
3. Prepare, listen and monitor the impact of Triple J premier of “Wake Up” by the Medics.
2 hours until Richard Kingsmill’s new music show kicks off – got butterflies and set alarm to remember to tune in to the stream in time. Daylight savings is maddening for promo, flights, anyone doing anything across states.
• The track was played at 6.47pm and one of the GREAT things about daylight savings is that I got to crank it twice. I felt relief that the statement was given the respect it deserves and that Richard Kingsmill put the protest song musical context around the intro too. Relief!
• We unlock the soundcloud link overnight as tomorrow as the band and I “wake up” we will be sharing the track far & wide.

Meetings:
Nothing today and working from home office – except a few reminders set in to the band’s calendar for social media posts to point family, friends and fans to the Triple J premier spin of “Wake Up” between 6-7pm Sydney time.

Activities:
Public Holiday today but I am up at 7am to activate the Soundcloud track as today is release day! It is bittersweet for a few reasons – one is that I realised a decade or so again, that I wasn’t comfortable celebrating on 26th January. The more I sought understanding of the Aboriginal and Torres Strait Islander people’s, it increasingly felt like a day to learn more, watch Indigenous films and documentaries, read the books and teach my children the full history of this country. Over the years I have taken the children to the Survival Day march or to see Brand Nue Dae and some are ploughing through the last quarter’s book keeping listening to the Triple J Hottest 100. Today it all came smashing together.

7 – 10am – spent trying to figure out why the hell Soundcloud wasn’t playing on mobiles esp iPhones, pushing my tech abilities, flagging it with the record label people for help, asking my manager’s network for help and feeling increasing pressure from the band – why the fk would it not work!

11am-ish – got in to the car after coffee to hear Thelma Plum’s ‘How Much Does Your Love Cost?” on the radio. I think “that’s nice boost after a shit morning . . .hang on it’s the Hottest 100 . . (SCREAMED VERY LOUDLY)” and start crying whilst texting Thelma. She was about to go onstage at the Rocks in Sydney in about 10 minutes . .it took us both 30 seconds to check twitter and realise it was Number 95. I have never had a track get in the actual countdown. An hour of processing social media and direct messages of congrats and watch the fans support. Awesome!

12 – 4ish Manage and monitor the roll out of Wake Up – watched articles go live on The Guardian and Cool Accident and reblogs and posts. Also astounded at the ignorance and hate comments but my mantra of “water of a ducks back, it’s not personal” and then amazed – it was working. An important conversation this country needs to have was rolling out before my eyes. Writers, journalists, commentators, artists all pushing the same message that The Medics are. There is no quick answer, but the conversation is important and it was exhilarating and the trolls and racism and criticism was exhausting at the same time.

7 – 9ish Hard to focus but things feeling good, social media shares started spiking again after the Hottest 100 was over. The track was playing okay embedded in blogs on mobiles but we had managed to flag with the head of digital at the label in NYC and they were talking to Soundcloud folks direct. (An apology ensued that is was a tech glitch at their end and unfortunately our track got stuck in the middle of it.

Meetings:
None – manning the HQ desk all day

Achievements:
Career highlight getting a track in to the Hottest 100, Releasing new music is always a highlight and to release a killer song, with a call for important social change and understanding of something relevant to ALL Australians and have it reported respectfully was an achievement.

Lowlights:
Throwing my mobile across the office in frustration of not understanding why the fuck the track wouldn’t work on mobiles (NB This was resolved overnight with an apology from Soundcloud HQ via Warner Music USA – they did some maintenance that affected playing on mobiles and although the rest of the world was asleep, it was a public holiday here that made sense for The Medics to release it – was just bad timing but resolved eventually)

Activities:
Settled my son in to his first day of Year 7 and debriefed with a colleague in the same boat that also works from home and got focused and determined for the year ahead.
5 hours focused work on emails, consolidating yesterdays frenetic media and statistics, updating the rest of The Medics team on the roll out (ie agent, publisher) , money business – paying bills, finalising budgets
2 hours back at the desk after hours to start reconciling the books from the 2nd quarter of 2014 . .that I probably could have done yesterday but distracted by all the excitement and stress outlined above!

Meetings:
Coffee with a friend/colleague as above – no other formal meetings

Achievements:
Taking Wake Up formally to Triple J for airplay consideration and then finding out via twitter (hell knows how a manager knows what is really happening without Twitter!) that Home and Hosed are spinning it again tonight.

Highlights:
Wake Up piece in the Guardian being reblogged internationally and positive comments from media and the Indigenous community in Australia about what the band did.

Activities:
Gym
Worked out of office all day on mobile and started planning meetings for 2015. One with the appointment of a booking agent to take care of show bookings, decisions on tour publicity for a March tour by Liam Gerner with Josh Rennie-Hynes and Caitlin Harnett and another to plan some events in July for my artists to do some profile shows locally.

Achievements:
Getting someone to book your act is always a huge relief! I can focus on other bigger picture things.

Highlights:
Inspired about some big ideas to steer toward

Found out my mother in hospital and needs a lot of care in coming months, this lowlight effectively meant reshuffling all music management tasks and non-urgent communication until at least the following week.

In summary, an intense week of great professional highs and intense personal lows. One of the great lessons as a music manager to learn early – is managed flexibility. Control and plan what you can, celebrate and have fun with the victories and be prepared to change course in the matter of hours.

MusicIIO is the user-name for Martine Cotton, founder and director of Music Industry Inside Out. Martine founded the much-loved music industry professional development resource after wrapping up her role as Program Manager at QMusic where she managed the state-wide education program, produced the Queensland Music Awards and Little BIGSOUND, and worked on BIGSOUND. She’s been kicking around live music since she was a teen and worn many many different hats over the years, including Splendour in the Grass staffing manager, The Zoo venue manager & booker (1995 - 2000), artist manager, booking agent, festival booker, stage manager, tour promoter, tour manager, professional photographer, event manager, digital marketing manager and consultant, music industry educator, university tutor and mentor. Martine is also currently a Performance Curator at TedX Brisbane. All of these roles have been fuelled by a life-long passion for music, the arts, technology, innovation and the creative community. 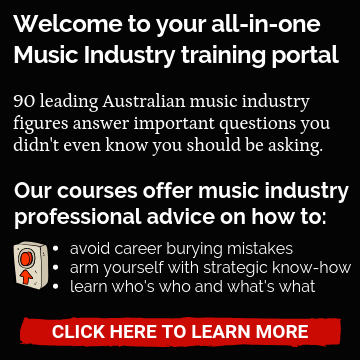 This Weeks Most Popular Pages

Email: info@musicindustryinsideout.com.au Phone: 0429 019 671
Please note, this is not the contact number for any of the mentors or interviewee's, it's the number for the manager of this website business.